Punctuation is a fundamental and critical element in writing, providing organization and lending intention to written thought. Commas, semi-colons, dashes, and periods all serve as suggestions to direct a reader through any piece of writing. But in what other forms than writing can punctuation be seen? Have you ever thought to look at these grammatical tools apart from their sentences? 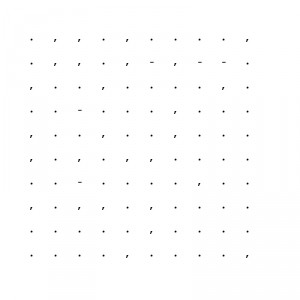 It’s unlikely that any of you reading this have ever taken note of how many punctuation marks are in your favorite books. However, you may decide to do so after seeing the work of scientist Adam Calhoun. He has developed a script that takes all of the words out of his favorite books and leaves the punctuation marks. The results are fascinating, contemplative, and even beautiful.

Perhaps the most telling part of Calhoun’s experiment is when he breaks down each book’s punctuation usage into bar charts.

Later, Calhoun decides to transform the symbols to heat map and the results are even more artistic and colorful.

This experiment has been done before in a slightly different way, if you can believe it. Calhoun was inspired by Nicholas Rougeux’s “Between the Words” posters. Using a piece of software called RegExr, Rougeux, “…stripped the text of words, line breaks, spaces and numbers, leaving just lines of shapes and symbols that he would later swirl into a vortex of typographical confetti.”

There are many examples of these “punctuation art” pieces.  Just Google it and see for yourself! Or, follow our blogs later this month when we will highlight a few other fascinating projects with punctuation and words.