TimelyText is 13 years old! Do you know what this number means? 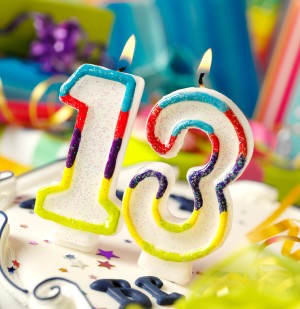 The TimelyText team is thrilled to be celebrating 13 years in business as the Triangle Area’s leading provider of instruction designers, technical writers, marketing writers, editors, and corporate communications specialists.  This is a wonderful milestone for us, and we consider it lucky 13, as this is going to be a great year!

The number 13 is an interesting number:  unlucky for some, lucky for others, avoided by many! We dug up a few interesting facts and tidbits to share.  Feel free to comment with your “Number 13” factoids in the comments!

In short, the number 13 is merely a number…something to remember, the next time you walk under a ladder, or when a black cat crosses your path…